Living in Melbourne right now may appear rather desperate when viewed through the lens of Murdoch-owned media or from utopian Queensland. But for Superman and I, life is good.

Until the next announcement on October 19, we are permitted to leave home each day for only four reasons:

Some folks can go to work, but they need to be in ‘essential services’ like food production, warehousing, manufacturing, and the post or in jobs where they work alone outside, like landscapers and garden maintenance. And they need to have a government issued permit to do so.

We are ok with all this.

I’ve been working from home for years now and Superman has embraced Zoom like the rest of the known world. He’s even had some fun with some of Zoom’s utilities like ‘break out rooms’. Being an extrovert, he has suffered more down times working from home in lockdown than me. Bless Covid19 for reminding us that ‘connecting’ online and over devices IS JUST NOT THE SAME AS IN PERSON. Turns out we all like our fellow humans a lot more than we thought! 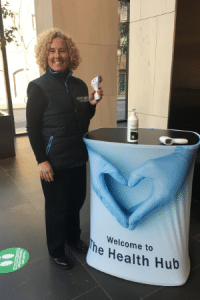 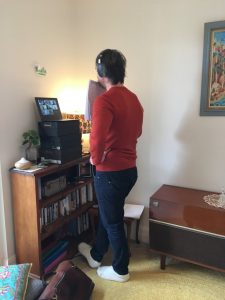 During July/August in comparatively flexible lockdown conditions, I worked providing Covid19 screening services to a global corporate in the CBD. A very common comment from the workers still coming in to work was that ‘they actually missed work’. Who knew? I even heard some kids on the news say the same about school! Unbelievable!

And it’s not often you will hear me say that! But during our (better part of a year) of lockdown, our social salvation has been screen-based breakdance comps, birthday parties, Trivial Pursuit marathons. I’ve even joined my niece in the garden of her brother’s drum teacher’s house for a pat of the neighbour’s dog!

And there’s been extra warmth in our neighbourhood too.

Whether it be a coffee catch up on our morning walk or five o’clock drinks on an afternoon walk, we’ve noticed a particular bunch of our neighbours catching up…all from their individual balconies. We’ve given and received baked goods with our neighbours. Not Covid-safe but who says no to a slice of Continental Torte from T. Cavallaro & Sons?!

And that’s something else that’s been heartwarming: empathising with our favourite restaurants and cafes and finding ways to send money their way. We’ve even been buying every second lot of coffee beans from a great little roaster in Bright, Alpine VIC. Bright was smashed by the fires too and cycling and snow tourism is their bread and butter usually. But not this year.

In the absence of going out for Melbourne’s world famous booze and food, we obviously stayed in and made our own. I am blessed because Superman is an excellent cook! He also took up making sourdough from scratch with his own starter and learned how to make some killer cocktails too. My new favourite is called a Jean Harlow. The perfect accompaniment for late night chats, engrossing movies and retro guest programmer sessions on rage. 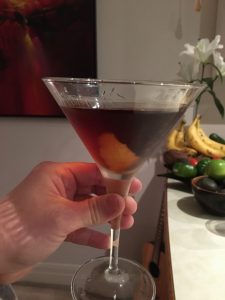 Needless to say, and despite the permitted hour of daily exercise we religiously took, by September we were fat and our eye balls were floating!

We could have been fatter had I not discouraged Superman’s intention to supersede his bread making hobby with an ice cream making hobby! ‘Can’t you find fun in growing bloody celery or something?’.

It has been stressful. This Covid19 season.
And we definitely leaned on alcohol and food to make us feel better throughout. And they came to the party nicely. I’ve noticed our family now ask us what we’re cooking this weekend and what drinks we’re pairing with that?

But we reached a point, realising we felt ‘full’ and stopped. And it was easy. It was time.

When I think back, I am actually going to give credit to a government public service announcement that caught my attention in August sometime. It depicted a young, professional woman having a cheeky wine that became less cheeky and more boring and routine because it was every afternoon.

’21 days is all it takes to make or break a habit,’ they said.
‘I know that!’, I said.
I’ve been saying that to clients for twenty years.
But this is the wonder and magic of Life Coaching isn’t it?

We can know it, but doing it is a whole different kettle of fish!

And for me, this TV PSA was my own personal pivot and reminded me of what I already know and it prompted me to act.

So after Gin Martinis at five paces on a Tuesday evening in early March, through Tequila shots for Dutch courage when making his first video the whole company would see, all the way to Jean Harlows and homemade sourdough, September was completely dry and refined carb-less.

And we both felt a million bucks because of the easy change and conscious choice.

We are enjoying how light we feel now from the tweaks to our food and so we continue what we enjoy from that way of eating. Almond meal and banana pancakes with maple syrup, fresh berries and sheep’s yoghurt was a hit this morning!

We now, free from habit and overwhelming incoming pandemic stress, consciously choose any alcoholic drinks we consume. Finding plenty of satisfaction in a mocktail Superman calls ‘Old man and the sea‘; a virgin ‘Islands in the stream‘.

Yes – Ernest Hemingway has been a fortifying lockdown element too! 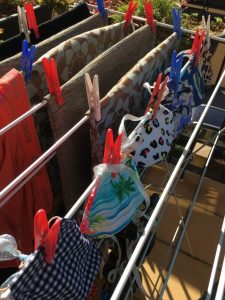 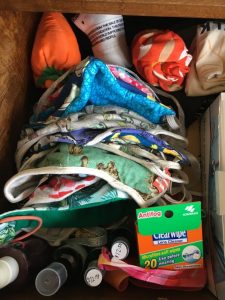 So we now have a supply of masks in the top drawer by the front door. In our apartment complex we must wear a mask when we leave our apartment because that’s ‘outside our home’ right? So that’s masked garbage runs, hanging out of laundry and picking up parcels from the postie at the front door. And obviously when adventuring further afield.

And that adventure presents us with the main challenge and stressor of lockdown right now. The thing about living in Melbourne right now that bites most, more than not travelling (as we LOVE), more than not spending time with our families in Queensland is feeling reliant on our fellow human beings for our freedom.

When we leave home and see some of our fellow Melbournites not wearing a mask or not wearing it properly or seeing our neighbours at St Kilda partying at the beach, we feel angry, sad, frustrated, disappointed, hopeless, futureless, trapped, depressed.

By far and away THE MOST stressful thing about living in Melbourne right now is having our future and our freedom reliant on the behaviour of other human beings.

And one thing Covid19 has taught me is that lots of people I previously thought reasonable and intelligent and rational, aware and in tune, are not.

Covid19 has exposed the cracks in the shiny veneer of our society.

From outbreaks in public housing, aged care, our casualised workforce and migrant communities, to the sometimes stunningly weak and selfish behaviour of educated, upstanding and well-to-do ‘leaders’.  Just like the crystal clear waters of an un-touristed Venice, clarity has been the gift of Covid19.

This virus has us showing our true colours.

So as a Melbourne man, with a hospital working, Covid19 treating wife and children who miss seeing their grandparents tweeted last Friday in response to the unmasked, non-socially distancing revellers at the beach: ‘Fuck you St Kilda!’

Go ahead and have whatever views you like about Covid19.
Despite mass burials in Spain, Italy, Brasil and ‘no room at the inn’ cemeteries in Jakarta and New York City – keep telling yourself and everyone else ‘it’s no worse than the flu’.

And keep doing half the job by leaving your dang nose hanging out your mask, complaining you ‘can’t breathe’. Because the tubes leading from our noses and mouths end up in the same place, you literally look like an imbecile doing this. Know that.
And you make me wonder if you would survive during a World War.
Could you breathe queueing for bread in the snow?
What if Covid19 were more like Ebola?
Would the threat of a more definite and messy death have you wear that mask properly?
I wonder.

I think we humans living in Melbourne right now are getting a taste of times to come.

Because it’s crunch time for our species isn’t it?
Shit is getting real.
We are currently, and have been for a long time now, been living an unsustainable existence, taking, taking taking, living beyond our means.
And the Covid cracks are exposing just how ‘connected’ and ‘evolved’ and ‘socially responsible’ and ‘aware’ we aren’t.

(And that BUT is for all my Coaching clients reading this!)

BUT…
the outright dicks are the minority here in Melbourne right now.
Our case numbers are proof of that.
So is the majority of the behaviour I witness day to day in my suburb.

As I see it, it’s not the outright dicks that are our species’ main threat. They only make up a quarter of us. It is the two quarters in the middle who don’t care, don’t take a stance, only complying (sort of) lest they get ‘in trouble’.
The middle – who are asleep and unrousable.

If our species and the world we LOVE to live in is to survive, it is these folk who must wake up.

Conformity is the jailor of freedom and the enemy of growth.
~ John F. Kennedy

So this blog has gone somewhere I didn’t expect it to go.
I am reaching a point where I realise I am long frame blogger.

You gotta be committed and interested to get to this point in my blogs, so if you are here now, well done you.

It’s you I want to work with and Coach.
It is you I would LOVE to hear from and hear your opinions and thoughts and ideas.
Because like me, you are questioning the status quo.
You are actively seeking your path; the way you, as one human being, can uniquely and open heartedly connect and contribute to our world.

I very much look forward to meeting you. And learning about your unique contribution, your purpose for living, your answer to ‘what’s the point?’. 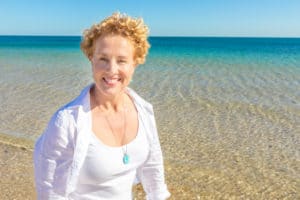